Posterior vitreous detachment (PVD)* is a frequent cause for concern and urgent evaluation.  It occurs when the vitreous gel- a mixture of collagen and water which fills the back part of the eye (between the lens and the retina)- becomes more liquid instead of gel like and separates from the retina. 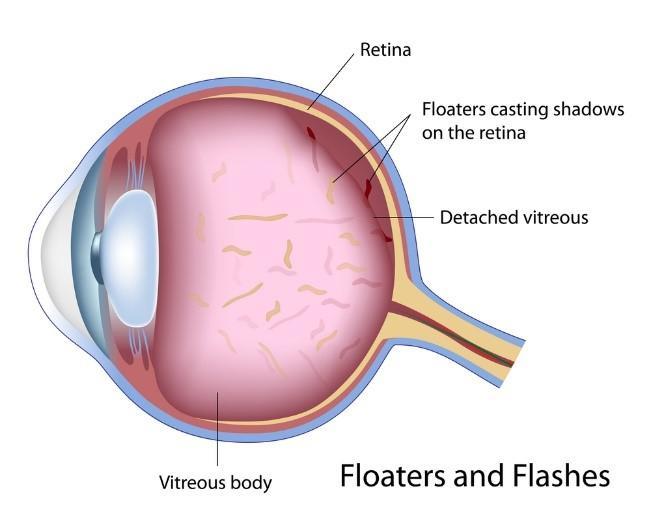 This is rapid onset event often associated with the sudden onset of flashes of light and floaters. The floaters can be dark or grey like spots, squiggles of even cobweb like. People often swat at the air because they think they are seeing fly in the room. Although most people think it is important to describe in detail the shape of their floaters it offers little to the diagnosis or treatment.

This is a natural, age-related process which occurs in the majority of people over the age of 65 and commonly presents after the age of 40 especially they are nearsighted. An eye injury, or jerky activity, eye inflammation and being very near sighted can lead to PVD earlier in life. People who have cataract surgery generally have already had a PVD earlier in life and see the floaters better after the cataract is removed. For patients who did not have a PVD before cataract surgery, they are likely to get one afterwards.

While most patients with a PVD do not have serious ocular complications, urgent (within 48 hours of symptom onset) screening and thorough vitreoretinal examination is advised. Retinal tears are present in up to 10% of patents with PVDs and must be treated to prevent retinal detachment.

If PVDs persistent with annoying visual impairment we offer in office laser vitreolysis if the patients is a candidate. We generally wait at least 3 months from the time of PVD to consider a laser treatment of the floaters. The doctors at InVision have been performing this procedure for decades and were among the first in the USA to offer this procedure.
A vitrectomy surgery can be performed for those patients with more diffuse and extensive floaters.